I saw this on www.comicbookresources.com, the first look at the Green Lantern's movie costume. Lex Loser should have something to say, as he has told me several times GL was his favorite comic book. I don't really have an opinion on it, it's not identical to the comic book; but I'm not sure if that would've worked in a movie. They're saying the costume is CGI, so I think I'll wait to see actually footage of the film before I decide. We should consider doing a GL heroine themed movie in the future to tie in with the release of this movie. I'm sure Lex would be all over that. 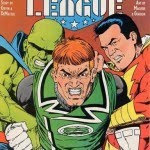 P.S. I know of Hal Jordan from watching Super Friends reruns, but my favorite Green Lantern is Guy Gardner. I'm a big fan of the 80's Justice League/Justice League International, I hope Guy makes a major appearance, he was the best.

Promote Your Page Too